The Board of Trustees

The Board of Trustees is the highest decision-making body of PHISO.

2. Frances Antoinette C. Cruz, the President of PHISO, is a tenured Assistant Professor of German Studies at the Department of European Languages, University of the Philippines, Diliman, and an affiliate faculty of the Center for International Studies at the same University. She has taught classes on transnationalism and migration, gender studies, and Middle Eastern relations with Europe. Ms. Cruz obtained her Master’s degree in International Studies from UP Diliman in 2016 and her MA in German Studies with a scholarship from the Deutscher Akademischer Austauschdienst (DAAD) at the University of Bielefeld in 2014. She completed her Bachelor’s degree in European Languages (summa cum laude) at the University of the Philippines, Diliman in 2009. Her key research areas are norm diffusion, the GCC, migration and IR in the Philippines. In 2015, Ms. Cruz was part of a Philippine team that won first place at the Geneva Challenge: Advancing Development Goals Contest. The team’s proposal explored the utilization of mobile technology to assist Filipino return migrants. In addition, she has presented and written papers on the networks of soft power in Asia, responses to migration in Arab Gulf States and technology and development. She is a member of the International Studies Association, the Linguistic Society of the Philippines and the Phi Kappa Phi Honor Society.

3. John Harvey D. Gamas is the Chair of the International Studies Department of the Ateneo de Davao University. He earned his Bachelor’s degree in International Studies major in Asian Studies with a minor in Philosophy, magna cum laude, from the same institution. He obtained his Master of Arts in International Studies, major in European Studies from the De La Salle University. He also holds a Master’s degree in Theology from the Ignatian Institute of Religious Education Foundation. He is a member of the European Studies Association of the Philippines and the Philippine Association for Chinese Studies. In 2014 his paper entitled The Tragedy of the Southeast Asian Commons: Ritualism in ASEAN’s response to the South China Sea maritime dispute was published by Brill in the European Journal of East Asian Studies. His research on international/diplomatic history, non-Western IR, regionalism, religion and IR, are largely inspired by the lens of constructivism and the English School.

4. Archill Niña Faller-Capistrano is currently Assistant Professor at the University of the Philippines Cebu. She is the Chairperson of the Board of Trustees of the Children’s Legal Bureau Inc., a longstanding pro-women and pro-children non-governmental organization in Cebu. She earned her Bachelor of Arts major in Political Science degree (magna cum laude) at the University of San Carlos (USC) in 1996 and proceeded to complete her Bachelor of Laws degree in the same university in 2000. In 2010, she was granted the Australian Leadership Awards scholarship to pursue her Master of International Relations degree at Monash University in Victoria, Australia. Her research interests include liquid modernity and human trafficking in international relations. She designed the first A.B. Political Science International Relations and Foreign Service specialization course offered by the Department of Political Science, School of Law and Governance of USC where she previously worked as faculty member. Archill is also a member of the Philippine Bar and a lifetime member of the Integrated Bar of the Philippines, Cebu City Chapter.

5. Erickson D. Calata was former Assistant Professor at the College of Governance and Public Policy at University of Makati, Philippines. At present, he teaches at the Political Science Department at Polytechnic University of the Philippines (PUP) in Manila. At PUP, he handles Political theory and methodology, Philippine Politics, Politics of Southeast Asia and Comparative Politics. He has published papers on Social Policy, Resettlement and Governance, and Social Trust and Democratic Spaces. His recent research interests include Politics of Knowledge Production in the Global South, Nationalism, and Colonization and Decolonization of Knowledge.

6. Brian U. Doce is an MA holder in International Relations at Jilin University located in Changchun City, Mainland China. He took Bachelor of Arts in Political Science at University of Santo Tomas with the honor of Cum Laude. His master’s thesis is about the role of religious actors as epistemic communities on Philippine socialization to the progressive norms of human security regimes. His research interests are international relations, foreign policy analysis, epistemic communities, religious actors and faith based organization (FBOs), and non-traditional security issues in East Asia and ASEAN. In terms of professional experience, he served as an editorial assistant of Documentation Service, a monthly journal published by Theological Centrum from May to June 2015. He also worked as a Research Associate for the Makati Business Club before he went to China for graduate studies. Currently, he is a member of the joint research staff of the Chinese National Language Committee for the ongoing research entitled “A Study on the Language Policies of One Belt One Road Countries” under the supervision of Liang Xiaojun.

7. Ricardo Roy A. Lopez is presently an MA Candidate in Asian Studies, Specializing in Southeast Asian Studies at the University of the Philippines Diliman –Asian Center (UPD – AC). His research interests include Southeast Asian Studies and International Relations. He is also a member of the Philippine International Studies Organization (PHISO). He has contributed articles in the Ateneo De Manila University – Department of Sociology and Anthropology’s Verstehen project and for PHISO – UPD – AC’s Forging a New Philippine Foreign Policy Collaborative Project. 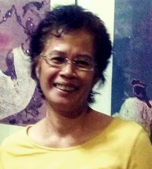 8. Lorna Q. Israel (admitted on November 27, 2019) is Senior Lecturer in the Department of International Studies, Miriam College where she has been teaching for the past 15 years.  She handles courses on Research Methods, Social and Political Though, Gender and Development Studies.  She also serves as the coordinator of the Department’s Graduate Program in International Studies.  She has BA in International Studies (Maryknoll/Miriam College), an MA in Philippines Studies from the Asian Center, University of the Philippines where she is doing her PhD on Philippine Studies (Foreign Relations). Her research interests include humor studies, gender and development, language, violence, socio-cultural studies, Philippine Studies.  She is a member and past president of Kasibulan Women’s Art Group.